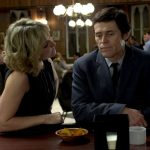 A psychological thriller based on the concept of anamorphosis, a painting technique that manipulates the laws of perspective to create two competing images on a single canvas.

Stan is a quiet, solitary detective in New York City. A few months ago, he solved a gruesome case of serial murders, although an undercover police officer lost her life. A new set of similar murders begins: the bodies are elaborately displayed and the killer uses equipment from art and early movie making in the tableau, or he leaves a clue as to where the investigators are to stand to get the full artistic effect. Stan is paired with a younger detective, Carl, whom he brushes off when Carl wants to get to know him. As pieces fall in place, it’s a race to prevent the next killing, quite possibly someone close to Stan.