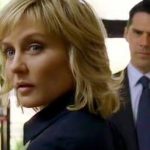 Cece Hillenbrand is the prosecutor in Brian Matloff’s trial and a friend of SSA Aaron Hotchner,

After a suspected serial killer wakes up from a coma, the BAU reopens the case and uses brain fingerprinting to determine if he really doesn’t remember the crimes that had been committed four years earlier in Roanoke, Virginia.

Aaron ‘Hotch’ Hotchner: So, what’s your plan?
Cece Hillenbrand: Plan? Try him and fry him!