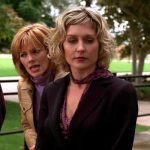 Kate Armstrong was the founder of Verbum Dei Charter School. She and her girlfriend Julia Eastman killed the Dean Vernon Woods with a brick.

Grissom and Warrick investigate when a victim dies of fear in the desert, apparently from being chased. Meanwhile Catherine and Nick investigate the gruesome murder of a Catholic school dean. Sara investigates how the body of a woman who was buried the previous week ended up in a dumpster.