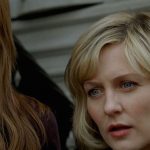 After a teenage girl is pronounced brain dead, her mother takes her off life support, but when doctors operate quickly to remove her organs, the deceased girl shockingly awakens screaming an alphanumeric code. Equally as perplexing as her resurrection is that she is now somehow able to speak Russian and possesses classified information only a high-ranking soldier would know. While the girl’s mind-bending condition intensifies, Walter dusts off some old lab videos and hypothesizes the unthinkable, sending Olivia and Peter to investigate the bewildering case.
Written by FOX Publicity