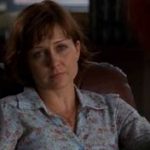 Det. Fontana and Green investigate the murder of a young woman found drowned after a ferry crash. McCoy charges the romantic rival of the victim, who had lost her firefighter husband to the victim and almost her children, and claims that she suffered post traumatic stress syndrome due to 9/11 attacks.

Colette Connolly: “I swear, sometimes I wish I had died on September 10th.”

Colette Connolly: “Every time a plane flies overhead, I get a knot in my stomach. And every time they raise the threat level, I think, my children will never see the end of this.”