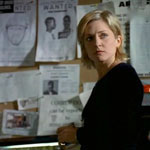 Written by:
Jody Worth
Directed by:
Farrel Jane Levy

An off-duty cop is found dead. Diane has yet to tell Jill about Don’s fate. Det. Baldwin Jones (formerly of the Bias unit and who prefers to be called “D”) reports to his new assignment at the 15 Squad. Sorenson’s street contact “J.B.” tries to bring them information for their case but Danny isn’t buying. The dead cop’s partner comes in for questioning and Sipowicz’s style gets her to reveal that she had a relationship with her partner, which doesn’t lead to anything. All the while the new guy and the other detectives canvas the neighborhood and find someone who can point out a probable suspect for the shooting. Fancy tries to find out why Jones was transferred into his unit, without any notice and it turns out it was just someone wanting to remind him about the fact that Fancy still lets Sipowicz do his job. Russell talks with Sipowicz about what she should do with the information that she knows and he suggests that she should tell; otherwise it would destroy their partnership. Meanwhile, the new guy is given the interview of the suspect they have for the cop killing. He shows them what he’s got and the case is put down. Diane tells Jill about Don, but doesn’t cover the details.