Thanks of a Grateful Nation

About the TV Movie:

An examination of the aftermath of Desert Storm and how servicemen and women were affected by it medically.

The 1991 Persian Gulf War is a military triumph for the United States. But when thousands of returning veterans start to develop medical problems, it appears that the military is trying to downplay or ignore the situation. It takes perseverance on the part of military families and members of Congress to bring to light the dilemma and prompt action on the part of the government.
written by Ron Kerrigan 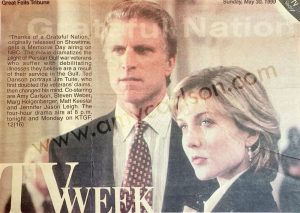 “Thanks of a Grateful Nation.”
originally released on Showtime, gets a Memorial Day airing on NBC. The movie dramatizes the plight of Persian Gulf war veterans who suffer with debilitating illnesses they believe are a result of their service in the Gulf. Ted Danson portrays Jim Tuite, who first doubted the veterans’ claims, then changed his mind. Co-starring are Amy Carlson, Steven Weber, Marg Helgenberger, Matt Keeslar and Jennifer Jason Leigh.
(Sunday, May 30, 1999)