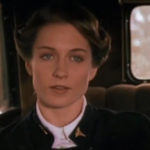 In 1930s Chicago, the seemingly invincible crime boss Al Capone is opposed by a team of incorruptible U.S. Treasury Agents, led by the indefatigable Eliot Ness.

Amys appearance in ‘The Untouchables’

About this Episode:
Childhoods of Al Capone, the future ambitious gangster who’ll try to become the crime boss of the prohibition era Chicago, and Eliot Ness, the future head of “The Untouchables”, a team of incorruptible agents formed to stop Capone.

About this Episode:
Having no allies within the corrupt Cuban regime, Ness and his team get in touch with the Cuban rebels who are trying to overthrow the president and his government. If they succeed, Capone’s plan to smuggle liquor from Cuba is D.O.A.

About this Episode:
Ness is told that he’s been in coma for a year. His family is gone, but his archenemy, Capone, is behind bars for good. Ness suspects something doesn’t fit when he’s asked about the whereabouts of one of his informers.