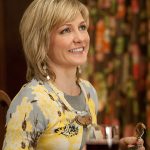 Blue Bloods follows the lives of the NYPD’s First Family of Law Enforcement: the Reagans. Frank, the Police Comissioner and son of former PC Henry Reagan, must balance his duties of running the largest police force in the world and being his kids’ boss. His daughter Erin is an Assistant District Attorney, son Danny is a senior detective and fellow Marine Veteran, and new Harvard Law grad turned cop, Jamie all swirl through this family drama and passionately defend their city from harm. The Irish-American family is deeply rooted in their patriotism, passion, and love of family.

Linda grew up in Staten Island and lived there until her death.
She graduated top of her class in nursing school and spent 10 years on the floor at King’s General before taking time off to be a stay at home mother. She eventually returned to work part-time at St. Victors when money became an issue for the family.
Linda has an opinion and is not afraid to share it, especially among family.

Amy about her role:

For seven seasons, Amy portrayed Linda Reagan, wife to Danny Reagan, played by Donnie Wahlberg. She likened her character to the ‘everyman’ at the dinner table. In a family of cops, (besides the children) she was the sole civilian at the table. She loved working with Donnie and had a tremendous run on this highly rated series. She has a great love affair with the fans who have supported her throughout her time there and always.