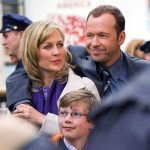 WHAT HAPPENED TO LINDA REAGAN IN SEASON 1

Linda is married to Danny since 1996 and mother of their two sons. Linda loves her husband and the Reagan family, but at times, Danny’s obsessive attitude toward collaring criminals makes her wonder whether he views his job as a higher priority than his family. In season one, she is a stay-at-home mom

*Pictures will be shown here later

01 – “Pilot”
The Reagan family is introduced on the day that Jamie graduates the Police Academy, having left a potential career as a lawyer to follow the family tradition.

02 – “Samaritan”
The Reagans weigh the rights and wrongs of vigilantism when a good Samaritan who has a police record takes action against a terrorizing subway criminal.

03 – “Privilege”
Erin, Frank and Danny work together within the system to find justice when a rape case’s primary suspect is protected by diplomatic immunity.

04 – “Officer Down”
Frank mobilizes the entire NYPD to find the killer of an off-duty police officer who was murdered during a diamond heist.

05 – “What You See”
With a bomb set to detonate in Manhattan, Frank, Danny and the rest of the NYPD search for its whereabouts. In the midst of the search, the Reagans argue the merits and downfalls of profiling.

06 – “Smack Attack”
Danny must find the narcotic source when three teenagers die from a drug overdose.

07 – “Brothers”
Erin’s family debates her methods when she uses a law-abiding citizen as bait to take down his gang leader brother.

08 – “Chinatown”
After witnessing a crime in progress, Jamie’s suspect is killed in the pursuit. Danny must solve the case to clear Jamie’s name and keep IA from a full-blown investigation.

10 – “After Hours”
While Danny investigates the murder of a popular nightclub’s doorman, Frank gets information that his ex-partner is covering up crimes.

11 – “Little Fish”
A 25-year old cold case of Frank’s is brought to the forefront when the missing boy’s remains are found. Danny and Jackie look into the death of a high-end escort.

12 – “Family Ties”
Danny investigates when the son of a Russian gangster is killed and Erin is assigned a high-profile corruption case.

13 – “Hall Of Mirrors”
Because it involves classified information and a sleeper cell, Frank assigns Danny to cover the shooting of an undercover counter-terrorism agent.

14 – “My Funny Valentine”
A drug addict becomes the prime focus of Danny and Jackie’s investigation after his girlfriend is kidnapped and held for ransom. Erin and Charles move past the flirting stage.

15 – “Dedication”
Is someone out to assassinate the Commissioner or was the shooting random? Danny takes on the assignment to find out the answer.

16 – “Age of Innocence”
Nicky rides along with Danny to a crime scene where a girl at a debutante ball has been murdered and she has a difficult time coping after seeing her first murder victim. Danny and Jackie follow-up a lead after a hotel surveillance camera shows a prostitute giving the victim a hard time.

17 – “Silver Star”
As a former Marine, Danny feels personally responsible for finding the killer of a former U.S. Marine war hero. Someone has leaked false information to the press that Frank is going to run for mayor.

18 – “To Tell The Truth”
Just before Danny is to give witness testimony at a Peruvian drug lord’s murder trial, Linda is kidnapped. This drug lord has a history of intimidating witnesses.


19 – “Model Behavior”
Danny and Jackie investigate the cut-throat world of fashion after Linda’s runway model niece and a reporter are poisoned at a fashion show.

20 – “All That Glitters”
Frank’s frustrations rise when the media sensationalizes the murder of a tourist shot and killed outside a trendy Lower East Side restaurant.

21 – “Cellar Boy”
Neighbors of the Reagans are murdered and their son becomes the prime suspect. Jamie is convinced he’s being pursued by the Blue Templar when his gun goes missing.

21 – “Blue Templar”
In his attempt to expose the Blue Templar, Frank chooses to bypass Internal Affairs after a drug bust indicates dirty cops are involved.