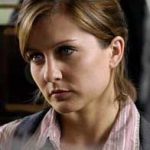 Peacemakers was a short-lived western that aired on the USA Network. In the late 1800’s a new addition to law enforcement is evolving. Forensic science is in its infancy and the Wild West will never be the same. Enter Federal Marshal Jared Stone, the product of the Old West who has the smarts to know that the times are changing and he has to change with them. With ex-Pinkerton Agent Larimer Finch and local mortician Katie Owen, they make up Silver City, CO’s., newest crime fighting team.

She’s the town mortician and emergency medic when Doc Gates isn’t there. She attended several years of medical school before dropping out to raise her younger sister after the death of their parents. Katie often helps Stone and Finch with their investigations, and she is slowly learning the role forensics can play in her field.