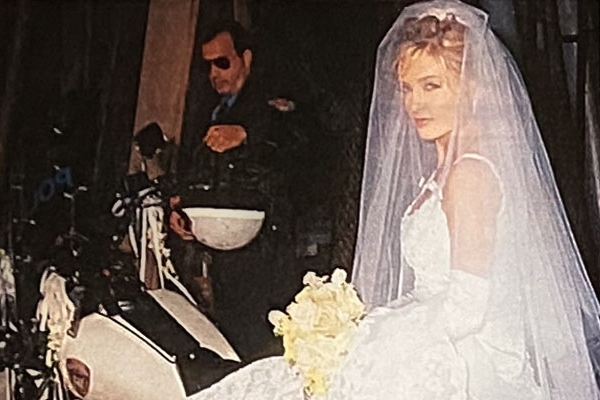 After shedding so many tears of sorrow, Josie and Gary let tears of joy flow this week, as they finally marry in a romantic ceremony on Center Street.

As the week begins, Vicky and Paulina help Josie into her gown, as Paulina imparts words of wisdom on the institution of marriage.
Meanwhile, Alexander turns green with envy when he goes to Felicia’s and spies Gary in a robe. Felicia explains that she’s Gary’s best man, and the groom is just getting dressed at her place. Alexander decides to plan a special gift for the newlyweds – his penthouse for their wedding night. 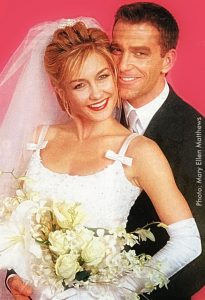 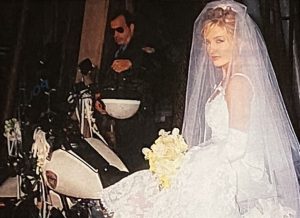 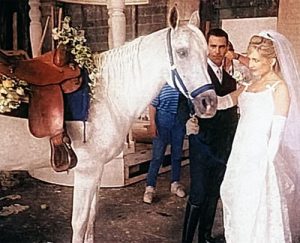 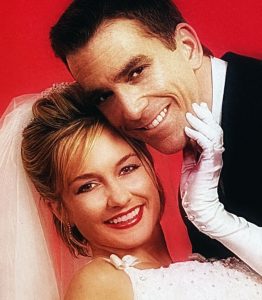 Josie and Gary Tie The Knot

But first Josie and Gary intend to have some fun at the ceremony, where they try to outdo each other’s entrance.
“Gary shows up on horseback, so Josie comes in on the back of a cop motorcycle, sirens blaring!” says a laughing Amy Carlson. But joy isn’t all the bride-to-be is feeling. Josie worries that her mother won’t come.

“Sharlene didn’t make it to the bridal shower, so Josie wasn’t sure she was coming (to the wedding) because she’s uncomfortable in town. When Josie gets off the motorcycle, she’s escorted by Joe,” Carlson continues. “But then she sees Mama and it’s such a relief. Josie looks at Joe and he immediately understands. Then Mama walks her down the aisle and gives Gary a kiss – which is weird because Felicia is standing next to Gary.”

For Tim Gibbs (Gary), walking on the set for the first time was an emotional experience. “It looked so pretty that I was nervous I was going to screw something up,” he recalls, “I Just wanted to disappear. I had real wedding nerves. When we were up there exchanging our vows, I had legitimate jitters that weren’t acting jitters. It was just the energy. That’s as close to getting married as I’ll get for many years,” he
adds with a grin.

After the ceremony, Alexander proposes to Felicia. Meanwhile, the love in the air brings Paulina and Joe back to each other; they reconcile after a heated argument. And Vicky has the honor of catching Josie’s bridal bouquet.
Josie shares a very special – and surprising – wedding gift with her new husband at Alexander’s penthouse. When Gary offers Josie a glass of champagne, she refuses, announcing that she’s pregnant.
Although Josie was a bit fearful of how Gary would take the news, she’s thrilled that he’s so excited.

“I think Gary feels pleasantly shocked, scared to death and blessed,” admits Gibbs.
For Gary it’s all about the realization of a dream that he could be worthy of somebody who enriches his life and provides a stable platform from which he can operate. Gary tells Josie that part of him never believed she would marry him.

“The whole richness in the character I play is that many of his weaknesses have been explored,” Gibbs adds. “I think he finds it hard to believe someone as great as Josie would marry him. And he tells her that.”

The next morning the newlyweds breakfast at the Harbor Club with Sharlene, who’s both floored and ecstatic to learn that she’s going to become a grandma. Then Sharlene and Josie say a heartfelt farewell and Sharlene leaves Bay City for good.
Josie and Gary are about to leave for the airport when Joe tracks them down with bad
news: Josie must postpone her honeymoon to be at the station for an upcoming trial. After a visit to the doctor – who pronounces mother and child in perfect health – Josie heads off to the station while Gary goes to their apartment.
While Josie’s gone, Gary brings a touch of the tropics to their home. When Josie returns home, she’s greeted by the sounds of Hawaiian music and Gary with a lei around his neck.

“Gary decorates the house, puts on a bathing suit and sips drinks in a baby pool,” says Amy Carlson, laughing, noting how apropos this is for the couple.
“Josie and Gary don’t have a lot of money, they don’t have a lot of social status, but they make the best of each situation and create their own little world together.”
Gibbs isn’t surprised at all by Gary’s romantic gesture.
“They’re always finding creative ways to deal with the trials and tribulations of everyday life. What keeps them together seems to be their ability to remain creative. It’s an ongoing courtship. If the writers will allow it, Josie and Gary will be courting each other even through their marriage, which is one way to keep the boredom from setting in. Since it’s a fantasy world, that’s pretty important.”

So Josie joins in the fun and dons a bikini as the two lie side by side. She teases Gary that he’s blocking her sun and he’d better rub some sun block on her back.

Wedding dress designed for a princess

”I thought Josie should wear a wedding dress with a very modern and feminine silhouette — a dress for an active young woman, yet
romantic and glamorous,” explains Erisa Yuki of the Yumi Katsura gown she selected for Josie.
”The fitted bodice with narrow straps and scoop neckline enhanced her great body shape. The sheer organza A-line over a satin sheath created a very alluring effect and the lace appliques with touches of crystals and sequins add to the glamour.

”Amy (Carlson, Josie) is a beautiful actress and she makes the l gown look even more beautiful,”
adds Yuki, who works at the Katsura salon in New York.

Since she isn’t planning to walk down the aisle anytime soon, Carlson admits she hasn’t given much thought to wedding dresses.
”I tried on so many and when we got to this one, I thought it was sweet, gorgeous, sophisticated and modern. I got so excited about it that I didn’t want to take it off, which is good on a soap because you don’t take off the dress for about 48 hours!” 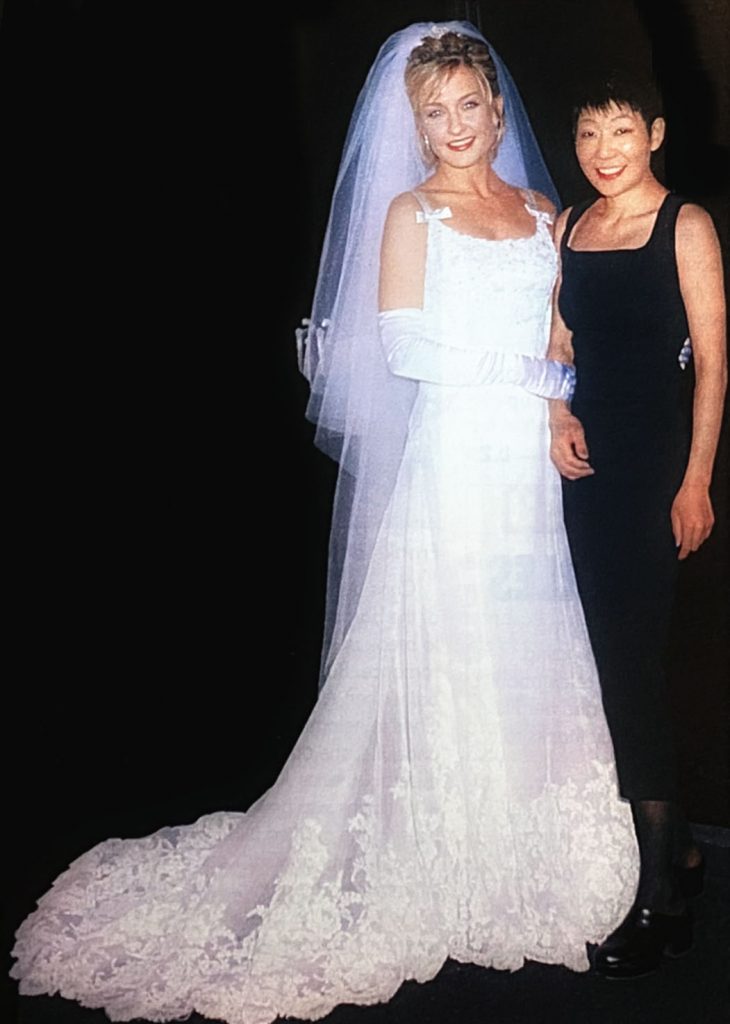