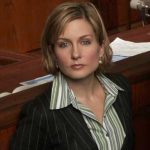 02 – “41 Shots”
When a police officer is executed by a career criminal A.D.A.’s Kibre and Gaffney must disregard the fact that the accused was shot 41 times by Police.

03 – “Vigilante”
Kibre and Gaffney take on the job of prosecuting a man who is suspected of killing a pedophile, who was recently paroled from prison.

Kelly Gafney: You know, I never asked you–what do you think Colby’s verdict was?
Tracy Kibre: You mean the sealed verdict in the back of some file cabinet somewhere? I don’t speculate.
Gafney: Four hours of deliberating, I know what I think.
Kibre: Well, you are wrong, they convicted him.

04 – “Truth or Consequences”
After a young woman is raped and murdered, A.D.A.s Kibre and Gaffney are puzzled by the triangle of suspects.

05 – “Baby Boom”
Kibre and Gaffney must prosecute a nanny accused of killing the baby she was caring for by causing shaken baby syndrome.

06 – “Pattern of Conduct”
Kibre tries a celebrity basketball star accused of raping and murdering his mistress.

07 – “Bang & Blame”
Kibre and Gaffney must regain their footing before the jury through some old-fashioned detective work which quickly reveals some critical holes in the murderer’s persistent claim that he has been victimized by everyone.

08 – “Skeleton” (Part 1 / Part 2)
crossover from Law and Order
The introduction for this episode aired as the Law & Order episode “Tombstone.”
Kibre prosecutes the man accused of shooting Detective Ed Green and murdering the key witness in the case he was working on.

09 – “The Line”
Kibre hopes for a break from a witness or forensic evidence and in the process alienates partner Gaffney when she ponders contorting ethical rules if necessary.

10 – “Blue Wall”
Kibre prosecutes two cops for the murder of a man being held in custody, who was sodomized by the two officers.

11 – “Day” (Part 1 / Part 2)
crossover episode of Law and Order: Special Victims Unit
Out of all crossovers between the Law & Orders, this is the only one that does not involve an episode of the original series.
A.D.A. Kibre works with Detectives Stabler and Benson to prosecute a serial rapist Gabriel after an attack on A.D.A Novak.

12 – “Boys Will Be Boys”
Kibre prosecutes the man accused of murdering his girlfriend who turns out to be a sex changed person, but Kibre soon runs into trouble when his father confesses to the same crime.

13 – “Eros in the Upper Eighties”
In the interests of justice, A.D.A.’s Kibre and Gaffney are forced to prosecute a doorman who killed a homeless man while he attacked a frightened woman who lived in the building.