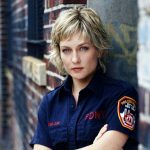 This series was followed the exploits of a group of police officers, firefighters, and paramedics in the fictional 55th Precinct and Fire Station 55 whose shifts fell between 3 pm and 11 pm, the “third watch.”
Produced by John Wells Productions in association with Warner Bros. Television

Paramedic\Firefighter Alexandra “Alex” Taylor worked as both a paramedic and a firefighter for the FDNY.
From a young age, Alex wanted to be a firefighter like her father, Angus.
She played with toy fire trucks rather than with a Barbie. Her brother, Adam, became a nurse, leaving Alex free to follow the family tradition. Alex graduated from the fire academy and received from her father a Saint Florian medallion, one of her prized possessions.
Alex is definitely a tomboy. Despite being the only female on the firefighting squad, she fitted in well with “the guys.” Alex is a good football player, often giving the others a run for their money. She is a firm believer in things being “wrong” or “right” and sometimes cannot see a middle ground. She loves her family deeply, but often worries that she isn’t good enough to please her father, and wants to make him proud (which he was anyway). Although it can appear that she is “always looking sad” and whines a bit, she cares deeply about anyone she saves, whether as a medic or a firefighter.