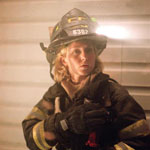 WHAT HAPPENED TO ALEX TAYLOR IN SEASON 2

Alex started work with the FDNY, previously working at another section with Danny Gamble, a friend of Jimmy Doherty. She sued him for sexual assault, but lost the case and thus asked to be transferred to another firehouse.
Arriving at the 55 as a firefighter, it was revealed she used to be a paramedic before “moving up” to the fire squad, and often worked as a medic during her time at the 55. Alex soon settled in, originally being treated as a “girly” girl before the others found out what she was really like. Despite the initial tension between her and Jimmy over the Danny Gamble case, they became friends after Jimmy found out what Gamble was really like.

01 – “The Lost”
In the 2nd season premiere, Sully’s worst fears come to the surface when the cops hunt for a kidnapping victim who has been buried alive. Sully’s mother wanders away from her nursing home. Bobby gives Kim a hard time for visiting Jimmy in the hospital. Bobby’s paternal instincts surface when he finds a lost 4-year-old. Carlos becomes attached to the cockatoo of a dead homeless man even after it attacks him.
Amy Carlson does not appear in this episode

02 – “Faith”
While Faith Yokas tracks a serial rapist, she considers getting an abortion because her family can’t afford to have another baby. When the rapist turns on her during a chase and hits her with a pipe, she lies to everyone, including her husband, that she miscarried and she gets the abortion. Bosco gets upset about Nicole’s past and how many men she’s slept with, and ruins their relationship.
Amy Carlson does not appear in this episode

03 – “Four Days”
On the hunt for a robbery homicide suspect, the police shake down all young black males they encounter, igniting racial tensions throughout the city. The suspect in question turns out to be Puppet, whose younger brother was killed as a result of Puppet’s gang activity despite Doc’s attempts to turn him away from the streets. After he’s shot by the cops and goes into hiding, Puppet solicits Doc’s help by proclaiming his innocence. The ensuing lengths to which Doc goes to get Puppet to the hospital and save his life while avoiding the cops wreak havoc with Doc’s relationships with both civilians and the squads.
Amy Carlson does not appear in this episode

04 – “Jimmy’s Mountain”
Jimmy’s recovery complicates his return to the firehouse as he tries to take on too much, causing discord amongst his fellow firefighters over his all-consuming need to prove his abilities have not been lost. Meanwhile, Alex Taylor joins the firehouse and arrives with some baggage of her own.

Davis: Who are you?
Alex: From the outfit, I’d say I was a firefighter.
Sully: You’re supposed to have a BarcoLounger attached to your ass. Where is it?


05 – “Kim’s Hope Chest”
Joey starts a fire at school, causing Kim and Jimmy to reevaluate their parenting styles and inspiring Kim to try to rebuild her family, starting with a reconciliation with Jimmy. But Jimmy’s relationship with Brooke is not nearly as wobbly as Kim would like to think, and Kim ends up jumping into bed with a stranger and then commiserating with her mother over her problems with men, ending in a confrontation with Brooke that forces Kim to rethink what’s best for Joey in the matter.

06 – “The Tys That Bind”
Davis rescues a drowning newscaster from a downed helicopter, and the ensuing rush of media coverage on his heroism brings a strange young woman to meet him. She turns out to be his half-sister, and Davis uncovers secrets about his father’s second family. The turmoil from the revelations causes disturbances between Davis and nearly everyone close to him. Meanwhile, someone’s throwing bricks at random citizens, putting everyone in the city on edge.
Amy Carlson does not appear in this episode

Taylor: How long you think he can go?
Bobby: I don’t know, he’s a big guy.
Taylor: Sooner or later they all fall.
Davis: I can hear you. What, you think I drank so enough I’m blind.

08 – “Know Thyself”
A group of prisoners escape from a delivery truck. Yokas and Fred have another big fight in which she accuses him of drinking again. She tells him that she had an abortion and he wants her to leave the house, which makes her stay over at her parents home. Meanwhile, Bosco gets a bunch of flowers from a former lover. He smells the flowers which turn out to be poison Ivy. Bosco and Yokas also have a fight when she tells him that she had an abortion. He accuses her of lying to him and he refuses to speak to her.
Amy Carlson does not appear in this episode

09 – “Run of the Mill”
The ordeals of an elderly friend prompt Sully to consider his own loneliness; Alex regrets revealing that she discovered Jimmy on the eve of his wedding having sex with an old flame who happens to be Lombardo’s current girlfriend after the news spreads like wildfire throughout the squad; Jimmy and Brooke get married.

Taylor: I walked in on Doherty with Lombardo’s date.
Bobby: What?
Taylor: Yeah.
Bobby: Wait, Jimmy– Are you sure?
Taylor: Yeah, cute butt, pants around his ankles, her legs wrapped around his waist. God, why did I have to open that damn door!
Bobby (smirks): Oh, my God. Well, you’re not gonna say anything are you?
Taylor: No, it’s not like we’re friends or anything. (Bobby starts giggling) Bobby…
Bobby (smirking): I’m sorry. I’m sorry.

10 – “History”
Doc is haunted by the darkest secret of his life when he bumps into his former high school girlfriend who reminds him of their life-changing deed 20 years before and though he tries to channel his guilt and rage, his emotions spill over as he chastizes his partner Taylor during an attempted resuscitation.

Taylor (after they get a call): Drunk bellyache.
Doc: Hey, if you don’t wanna work EMS then don’t. (walks off)
Taylor (to Kim): This oughta be fun.

Taylor: Doherty says he and Brooke had a great time in the Virgin Islands. Ironic place for them to honeymoon, don’t you think?

11 – “A Hero’s Rest”
Doc is haunted by the darkest secret of his life when he bumps into his former high school girlfriend who reminds him of their life-changing deed 20 years before and though he tries to channel his guilt and rage, his emotions spill over as he chastizes his partner Taylor during an attempted resuscitation.
Amy Carlson does not appear in this episode

12 – “True Love”
A secret threatens to destroy Jimmy’s relationships at work and home; Sully makes a date with his pretty neighbor; Bosco gets violent after his mother is beaten by her boyfriend.

13 – “Duty”
Sully is upset when he is wrongly accused of falsifying evidence; Bobby helps one of his former teachers dying from cancer; Carlos deludes himself into thinking that Kim is falling in love with him; Sully gets closer to his pretty neighbor.
Amy Carlson does not appear in this episode

14 – “A Rock and a Hard Place”
Officers Yokas and Bosco are trapped undetected with Carlos and a wounded Doc in a dark, abandoned subterranean tunnels where their radios are useless, and as they ponder their fate, Doc’s life seeps away while their only hope might be a vengeful gang of drug runners who are certain to return for a lucrative heroin stash. Elsewhere, Officer Sully tries to cover for the missing Bosco when the commanding officer decides that he’s gold-bricking. It’s a quiet day at the firehouse. Alex is happy that she’s finally feeling like part of the gang, but doesn’t want to be dating Bobby, so she tries to trick him into breaking it off with her by telling him that she wants a threesome with another guy. Lombardo and the gang are still giving Doherty a hard time, so when Lombardo stupidly shoots a potato in the wrong direction and breaks a cop car window, Doherty takes the rap.

(Taylor is hanging on the wall from her turnout gear)
Bobby: I’ve been thinkin’ about what you asked me.
Taylor: Bobby, you’re not gonna let me down, are ‘ya?
Bobby: No, I’m not. Now, I hope you’re not too disappointed about this….
Taylor: Look, could you just get me off the friggin’ hook?
Bobby: But, Alex, the answer to your propsition is yes.
Taylor: What?
Bobby: Yeah… and it wouldn’t be my first time. I’ve done it before.
Taylor: You have?!….

15 – “Requiem for a Bantamweight”
Bobby is asked by a former girlfriend, Gina, to help her brother Paulie who is also an old friend of his. Paulie, a would-be pugilist whose career quickly flamed out is now a hopeless junkie near death. While Bobby wonders what his life could have been with the now-married Gina, he is torn apart watching his sick running mate, who would sell his soul and anyone else’s for a dime bag.
Amy Carlson does not appear in this episode

16 – “Unfinished Business”
As doctors try to save Bobby’s life, the police search the city for Bobby’s drug-addicted childhood friend, who shot him. They capture the shooter, but Bobby dies.

17 – “The Self-Importance of Being Carlos”
Carlos is rebellious and unaffected by the tragedies around him. During sensitivity training, however, he proves that he has a genuine passion for helping people. Doherty gets scared when he finds out that his former lover is pregnant.

Taylor: What kinda question is that? ‘What is…’
Carlos: …. compassion. To you. Why did you want to become a fire– um, person?
Taylor: Uh, my dad made me do it? (Carlos laughs, Taylor holds up the knife she was cutting her sandiwsh with) That’s funny?
Carlos: Not if it’s not supposed to be.
Taylor: Let me explain something to you about my dad, he bleeds red.
Carlos: Doesn’t everybody?
Taylor: Fire red. He’s one of those old school guys. You know, everyone in the neighborhood was a fireman, he always wanted to be a fireman, became one right otuta high school, been one his whole life. So, when he had a kid, he was gonna be one, too….


18 – “Honor”
Doherty plays against his rival firefighter (football star Jason Sehorn) in a football game, but the competitors must join forces to battle a deadly blaze. Brooke serves Doherty with divorce papers.

(they are using food to figure out plays to use in the game)
DK: That’s why we lost the last four games.
Lombardo: You got somethin’ better?
Taylor: Why don’t we overload the one side, and send Jimmy on the fly?
Walsh: My future wife speaks. Honey, take the noodle and show the chumps how to play.

Walsh: Alright, you wanna sit on it and go for the tie?
Taylor: Oh, please don’t tell me I got my ass kicked for a tie!
Jimmy: All right, in honor of Alex, let’s just go for the win.


19 – “Walking Wounded”
Faith and Bosco hunt down the dealer who distributed a batch of lethal heroin. Depressed over Bobby’s death, Kim attempts suicide.Sully tries to solve an epidemic of heroin overdoses by reasoning with a drug dealer. Sully decides to help Tatiana become a citizen–but not by marrying her.

20 – “Man Enough”
Doc proposes marriage to Sara, but she wants to move to Philadelphia. Doc also intercedes on behalf of a pneumonia-stricken single mother.


21 – “Exposing Faith”
Yokas rebels after Fred cancels their weekend together in order to compete in a silly contest.
Amy Carlson does not appear in this episode

22 – “…and Zeus Wep”
Ty, Sully, Bosco, and Faith rush to the scene of a school shooting; Sully and Tatiana ponder their future together; Kim continues to struggle with her depression.