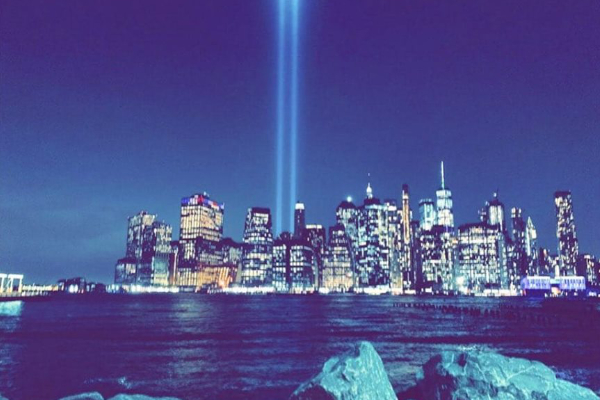 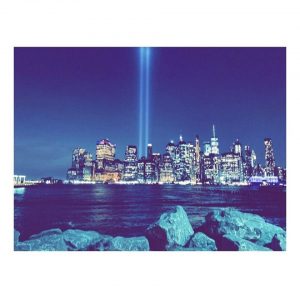 Today I’m remembering two things from when I woke up that day.
One was l: the show I was working on portraying a fire fighter, (Third Watch) was supposed to shoot in Harlem that day. Obviously very quickly, they canceled the day’s work. Later- our producer -Brooke Kennedy— would be the first to set up stage/flood lights from the set- for people to dig in what would become known as “the pile.” We lost 13 firefighters and police officers who worked by our side as background actors that day. People we laughed with -people who taught us to portray the real things, the actual heroes.

I also am thinking of how – that morning Syd was on his way to pick up tickets in Tower One.
Thankfully, he hesitated after calling and someone on the other end of the call, in Tower One, said “the fire alarms are going off.”
A couple short weeks later, his band, LesSayyFav , Went on tour across the United States. Everywhere they went if they said they were from New York City people would pay for their lunch – give them hugs – greet them as fellow United States citizens.
I can’t help but think back to that time today as we are so divided as a nation and remember how at one time we all felt so close, united under one common flag, united as Americans.

Today we honor those we lost. The FDNY members and NYPD members, the Port Authority members who ran toward the Towers, while the rest tried to escape harm.
It was a day of unimaginable loss. A day when every New Yorker was a victim of attempted murder. A day that will live on in infamy. A day the fire department lost six times more than they have ever lost in one day ever before.

What lessons did we learn? How will we honor their memories?